Ameesha Patel posts a flashback photo of herself and Hrithik Roshan.

Ameesha Patel shared a throwback photo featuring Hritik Roshan and Hrithik Roshan . The Race 2 actor is seen sitting on a chair with the Krrish actor standing beside her with closed eyes .

New Delhi, India, August 6: Actor Ameesha Patel took a stroll down memory lane on Saturday by sharing a throwback photo featuring Bollywood actor Hritik Roshan as well as their debut film, which was a blockbuster hit.Hrithik and me in my childhood home in south Mumbai, a few days before we started shooting KAHO NA PYAAR HAIN.In the video, the Race 2 actor is seen sitting on a chair with the Krrish actor standing beside her with closed eyes.She wore a white top with black pants, as shown in this video.

The film was a hit, and Ameesha and Hrithik were praised for their extraordinary performance.She became a household name in the entertainment business after a string of smash hits, including Gadar, Humraaz, Bhool Bhulaiyaa, and Race 2.Sonia (Ameesha) and Rohit (Hrithik) are in love with each other but Rohit is mysteriously killed in the film.Sonia needs to travel to New Zealand, where she meets Rohits lookalikes Raj.Anupam Kher, Farida Jalal, Satish Shah, and Dalip Tahil are also in Kaho Naa... Pyaar Hai.Meanwhile, in terms of the work front, the Race 2 actor will be seen alongside Sunny Deol and Utkarsh Sharma in the action film Gadar 2. On the other hand, he will be seen in Vikram Vedha alongside Saif Ali Khan and Radhika Apte, which will be released on September 30, 2022.Along with this, he also has Krrish 4 in his kit. 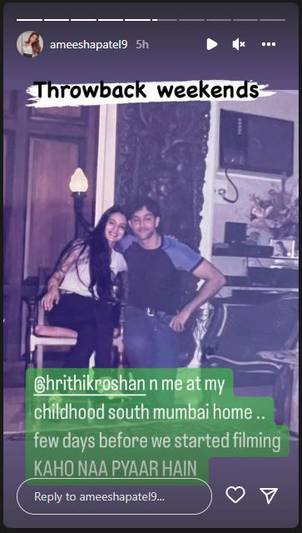 Pooja Gor, who is known for her role in Pratigya, remembers Anupam Shyam.