At the Commonwealth Games 2022, Vinesh Phogat, Ravi Dahiya, and Avinash Sable are the stars of India's Day 9 performance.

Birmingham, United Kingdom, August 7: At the forthcoming Commonwealth Games 2022, Indian wrestlers asserted their status and won three gold and as many bronze medals.So far, Indian athletes have won 40 medals, including 13 gold, 11 silver, and 16 bronze.Day 9 of the multi-sports competition was jam-packed with gold, followed by a historic feat in gymnastics and a windfall in wrestling.Avinash Sable claimed a silver medal in the mens 3000m steeplechase at the CWG, while Priyanka Goswami captured silver and made history by winning the first-ever medal by an Indian woman in the 10km race walk.

Vinesh Phogat won gold at the Commonwealth Games, earning her first medal.Ravi Dahiya and Naveen, respectively, captured their first CWG gold medal, which was coloured gold.Pooja Sihag, Pooja Gehlot, and Deepak Nehra all earned bronze.At Birmingham 2022, lawn bowls continued to crate history, thanks to the mens fours team that captured the silver medal. PV Sindhu, Lakshya Sen, and Kidambi Srikanth all advanced to the singles semi-finals in badminton, though Aakarshi Kashyap crashed out in the quarters.Sharath Kamal and Sathiyan Gnanasekaran advanced to the singles semifinals.Sharath Kamal and Sreeja Akula advanced to the mixed doubles final.Dipika Pallikal Karthik and Saurav Ghosal, the world's best squash mixed doubles team, were unable to advance to the semi-finals, but they will compete for the bronze medal on Sunday. 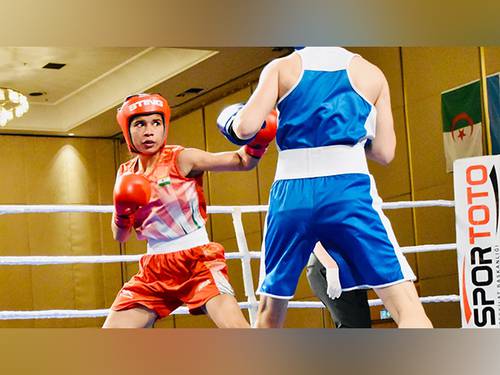 In the opening round of the Durand Cup, FC Goa will take on Mohammedan Sporting.

Cheteshwar Pujara scores a career-high 174 for Sussex against Surrey in the Royal London Cup One Day.

Wightman aims for a Euro 800m renewal, with dad coaching rather than commentating

Jamal Musiala scores once more as Bayern Munich defeats Wolfsburg in the 2022–23 Bundesliga.