Fans are given a preview of Rajkumar Rao's trip to Paris with Patralekhaa.

Rajkumar Rao posted a selfie with his wife Patralekhaa in front of the Eiffel Tower in Paris . The actor will next appear in Mr & Mrs Mahi opposite Janhvi Kapoor in Chandigarh .

Mumbai (Maharashtra) India August 6: Rajkumar Rao, the actor, welcomed his fans to a glimpse of his holiday to Paris with his wife Patralekhaa, who is seen enjoying a good time in Paris.Recently, Rajkumar posted a selfie with Patralekhaa in front of one of the world's seven wonders, the Eiffel Tower in Paris.They had been dating for more than a decade and married on November 15 last year.Rajkumar will next appear in Mr & Mrs Mahi opposite Janhvi Kapoor in Chandigarh as a traditional marriage ceremony.This will be Rajkumar's second collaboration with Janhvi after Roohi. 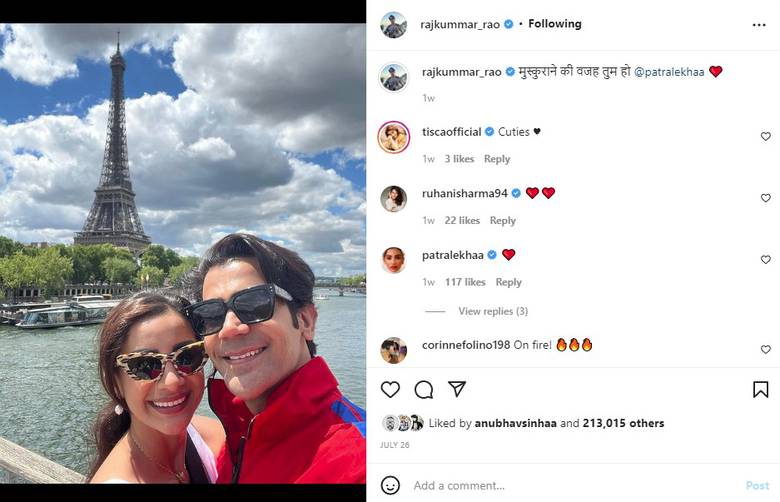 On August 26, Arulnithis Diary will be released.

In the most recent released video, Shaam's part in Varisu is explained.

Pushkar and Gayathri, the directors, allude to collaborating with Ajith on their upcoming project.

According to Aamir Khan, South Asian filmmakers can relate to their audience and make quality films.