New Delhi, India, November 25: The Indian CS:GO team will lead the countrys quest at the IESFs 14th World Esports Championship, where they will face Tajikistan on December 2nd.A team of Ritesh Sarda, Shuvajyoti Chakraborty, Anshul Adarkar, Hrishikesh Shenoy, and Harsh Jain have been named in Group C along with Tajikistan, Team After finishing in eighth place in the last edition of the tournament in Eilat, Israel, the team will be desperate to finish on a podium finish this season, according to captain Ritesh Sarda of Team India CS:GO.We as a squad are excited and able to participate in the forthcoming WEC in Bali starting next week.The world finals are going to be a huge spectacle.

The upcoming 14th World Esports Championship will feature top athletes from over 120 countries competing in six different Esports categories: CS:GO, Dota 2, Tekken 7, eFootball, as well as debutants from PUBG Mobile and Mobile Legends: Bang Bang Bang.The tournament will be held in Bali from December 1 to 12, with a generous prize pool of USD 500K (roughly INR 4 crores).India's esports squad is made up of the same players that represented India at the last World Esports Championship in Eilat and had won the National Qualifiers (NESC2022).This is another great opportunity for India's esports squad after the Commonwealth Esports Championships. We are confident that this group of athletes has a huge potential and will take on a tough challenge to the best of the world and be victorious, making our glorious nation proud.The Esports Federation of India's Yugal Kishore Sharma wishes them all the best and looks forward to seeing them win their respective titles, said the organization's CEO.India will compete in Group E against athletes from Pakistan, Bahamas, Venezuela, and Palestine, with Hitesh Khorwal (Rcool) and Hemanth Kommu (Peshemak7) taking part in the Tekken 7 and eFootball tournaments on December 3.The match against Bolivia's Lucius Antoine will be a highlight for the Indians.Arslan claimed the VSFighting X, Dreamhack 2022, and Combo Breaker 2022 titles earlier this year. Since our game has progressed tremendously well and reached a new zenith, WEC is always an uphill battle for Tekken participants.So, it's a moment I want to cherish for myself.After putting my blood and sweat into this sport, it provides a perfect backdrop for me to achieve glory.This time, I am more suitable for the WEC. Its a rare opportunity to prove my mettle against the literal virtuosos of the title, and my body, soul, and spirit are able to handle it.Bali is a place to live!Hitesh expressed his excitement ahead of the World Championship Finals, on the other hand, as part of Group P, where he will meet athletes from Kazakhstan, Armenia, and Guinea.It is an awesome feeling and privilege to represent our country at the 14th World Championship Finals. Im positive with my grind and will do my best to achieve the best finish in the tournament and hope to return home with a little more glory.Hemanth said that he hopes to represent India in the world finals by playing in the best-of-three style for Tekken 7 and CS:GO in the best-of-one style.Following the conclusion of the group stage, the Top-2 teams from each group will advance to the next round of the CS:GO and Tekken 7 tournaments, whereas for eFootball only the top team of the group will qualify. 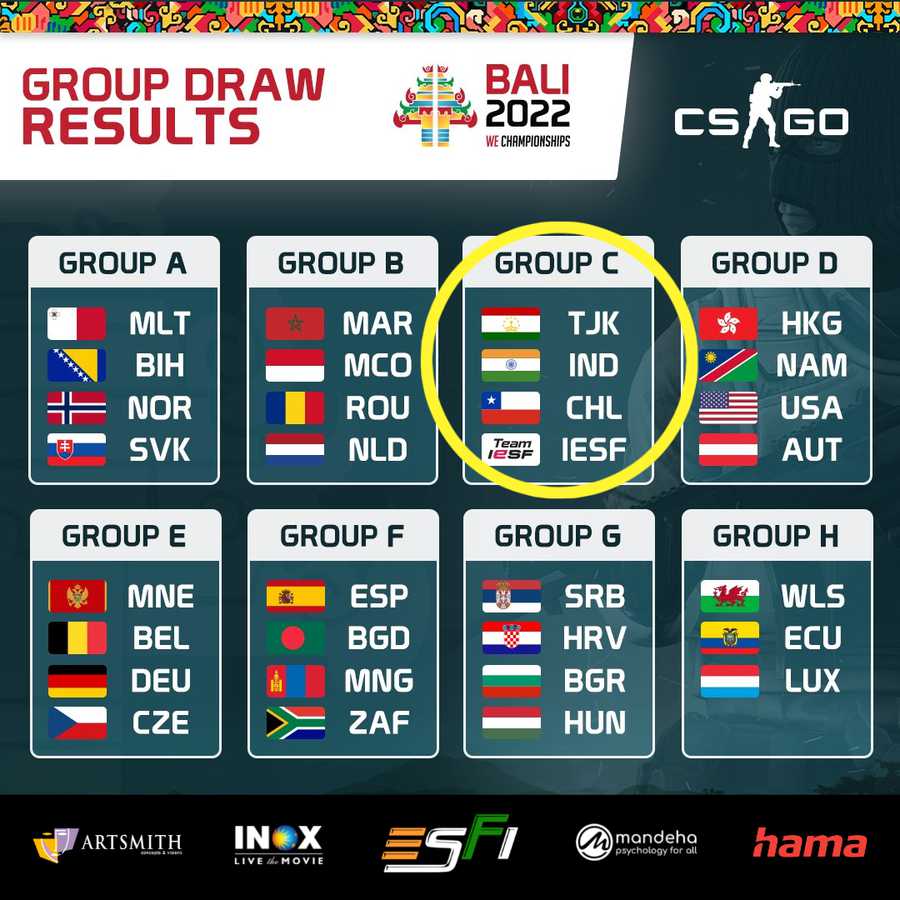 Full List Of Retained And Released Players For The IPL 2023

IPL 2023: RCB release Sherfane Ruthenford while keeping the majority of their core team, including Faf, Virat, Maxwell, and Hasaranga.