Jagdeep Dhankhar, a lawyer and community activist known as Kisan Putra, has been appointed as India's new vice president.

Jagdeep Dhankhar was elected Indias 14th Vice President on Saturday . He was born in Rajasthan in 1951 .

New Delhi, India, August 6: Jagdeep Dhankhar, a former West Bengal governor who was elected India's 14th Vice President on Saturday, was born on May 18, 1951, in an agrarian household in a village in Rajasthans Jhunjhunu district.Dhankhar graduated from Sainik School, Chittorgarh, to a higher education.After completing his degree in physics, he pursued a LLB from the University of Rajasthan.Despite being a first-generation professional, he became one of the state's most prominent lawyers.Dhankhar, 71, has also clerked in the Rajasthan High Court and the Supreme Court of India.

In 1990, he was also Minister of State for Parliamentary Affairs.Former deputy Prime Minister Devi Lal influenced his ideology and later joined the Rajasthan Assembly in 1993.Dhankhar was elected in the Rajasthan Assembly in Ajmer district in 1993 and had stalemates with the Trinamool Congress government on a number of issues.On July 17, he resigned as West Bengal Governor before running as Vice President of the BJP-led National Democratic Alliance (NDA).Prime Minister Narendra Modi praised the NDA vice-presidential nominee's humility and said he has always cared for the welfare of farmers. He brings with him an illustrious career in law, legislative, and gubernatorial office.He has always worked for the well-being of farmers, youth, women, and the marginalized.In a Twitter post, PM Modi expressed happiness that he would be our VP candidate.Jagdeep Dhankhar Ji has a thorough knowledge of our Constitution, according to a Twitter post.He is also well-versed in legislative matters. The Vice President-elect will take office on August 11, a day after the term of incumbent Vice President M Venkaiah Naidu expires.Dhankar will preside over the proceedings of the upper House of Parliament at a time when there are evident differences between the treasury benches and opposition.With Dhankhar's election as Vice President, the presiding officers of both Lok Sabha and Rajya Sabha will be Rajasthan. 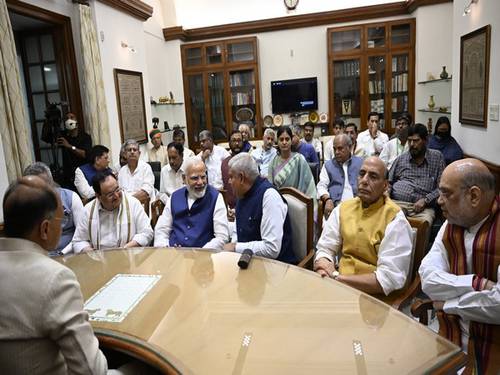 After a fight with her parents over a 2-wheeler repair, a girl commits suicide in Dehradun.

Bamu delays the start of classes in Aurangabad