Anushka Sharma has given cricketer Jhulan Goswami a warm and heartfelt salute . The Zero actress shared a note on her birthday on her Instagram account .

Mumbai (Maharashtra) India: Anushka Sharma, a Bollywood beauty, has given the cricketer Jhulan Goswami a warm and heartfelt salute.The 34-year-old actress shared a note on her birthday on her Instagram account.Here's a note about her debut.You are a generation-defining cricketer who has levelled the playing field for female cricketers in India.Goswami's story was posted on her own Instagram pages earlier this month, showing some love for the Zero actress.A source close to the film revealed that Anushka has started shooting for the last time in Chakda Xpress in Mumbai early in November.

We all know she has always strived to be a perfectionist, and she has left no stone unturned in this film.Anushka has put in months of preparation to get to the heart of the legendary fast bowler.According to the producer, the film would be based on the life of the Arjuna Award-winning cricketer.After the 2018 supernatural horror film Pari, Prosit Roy's second collaboration with Anushka would be exclusively streamed on Netflix. 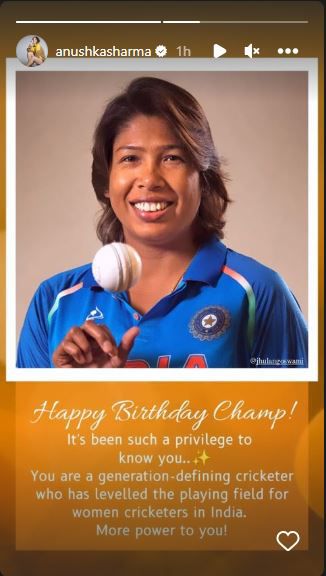 Shah Rukh Khan thanks his supporters while sharing a birthday selfie with them outside Mannat.

How Heidi Klum used the restroom while wearing her Worm attire

Virat Kohli was hailed as the "King and GOAT" on Twitter during India vs. Bangladesh.