Neena Gupta dispels rumours that Vadh had connections to the murder of Shraddha.

Neena Gupta and Sanjay Mishra have collaborated on a psychological thriller titled Vadh . The film is scheduled to arrive on December 9, 2022 by Luv Films Luv Ranjan and Ankur Garg .

Mumbai (Maharashtra) India : Sanjay Mishra and Neena Gupta, two Bollywood stars, have collaborated on a psychological thriller titled Vadh.Following the publication of the film's trailer on Friday, rumors of the film portraying the murder of Shraddha Walker, according to Neena, the murder scene in the film is similar to Aaftab Amin Poonawala's live-in partner Shraddha in south Delhi's Chhatarpur.Our film has nothing to do with the Shraddhas murder trial.Please refrain from making false assumptions about the film.

In this film, Sanjay Mishra, who is known for his comic roles, will portray a serious character.Neena said that as a result of the pandemic, peoples' habit of going to cinema halls has changed.They have also become a little bit lethargic and don't spend much time on watching movies in the theater when watching multiple films in the comfort of their homes.However, I do think people will return to the theaters once more, as a result of the films produced by Rajeev Barnwal and Jaspal Singh Sandhu. 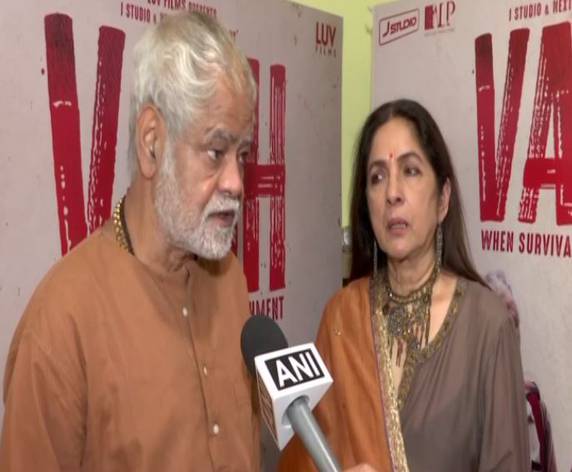 Kranti, starring Darshan, will premiere on THIS day in theatres.

Review of Raymond & Ray: A brotherhood tale that falters despite Hawke and McGregor's involvement

AP Dhillon was taken to the hospital after getting hurt while touring the US.

Elephants' birth in Kenya surprises the mother and the caregiver.