Mumbai (Maharashtra) India – (Maharashtra), November 30: Actor Arjun Kapoor reacted angrily to reports of his partner's pregnancy on Wednesday, posting a photo on Instagram and condemning the fake news.He said, You have done it by being casual, insensitive, and completely unethical in broadcasting garbage news.Since we often ignore these fabricated gossip stories as they are circulated around the web and become the truth, this journalist has been writing such pieces on a regular basis.This isn't happening.Do not dare to mess with our personal lives, Malaika has slammed the study in her Instagram post.

Malaika and Arjun have been dating for a long time now.However, Malaika and Arjun first revealed their romance publicly a few years ago, and even after all the trolling due to the 12-year age difference between them, they continue to shower on each other on social media.Meanwhile, on the work front, Arjun will be seen alongside Radhika Madan, Tabu, and Konkana Sen Sharma in director Aasmaan Bhardwajs dark comedy film Kuttey.On January 13, 2023, the film is scheduled to reach theaters.Malaika will appear in Moving With Malaika, an action drama from which actor Bhumi Pednekar is included in his kit. 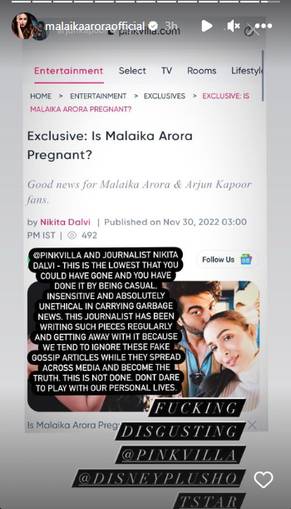 Geeta Rabari releases the artwork for her upcoming song, Zanzariyu.

At the 2022 People's Choice Awards, Ryan Reynolds will receive the Icon Award.

Nikitaa: Beyond the male gaze, Apsara explores my sensuality