Richa Chadhas Galwan's comment is denounced by the film organisation FWICE as being extremely irresponsible.

Richa Chadhas has been accused of insulting the army by referring to the 2020 clash between India and China . Richa said on Wednesday that the Indian Army is able to execute any orders on returning Pakistan-occupied Kashmir (PoK)

Mumbai (Maharashtra) (India), November 24 : The Federation of Western India Cine Employees (FWICE) has issued a statement condemning Richa Chadhas' comments about the 2020 Galwan clash.In a statement, FWICE described Richas' remarks as irresponsible and asked him to offer an unconditional apology.The Federation of Western India Cine Employees, the oldest and largest organization of Cine employees in India and the mother body of 32 different types of workers, designers, and artists working in the film industry, has condemned Actress Richa Chadha's inflammatory and disrespectful tweets, according to the statement.We also asked the entire film industry to come forward and condemn her conduct, which has not only harmed the Army's sentiments but also that of every Indian, and we've requested that we take steps against her, it stated.

In the Indo-China war in the 1960s, he received a bullet in the leg as a Lieutenant Col. My Mamaji was a paratrooper.It's in my blood, Richa wrote.When their son is martyred or even injured while protecting a nation made up of individuals like us, a whole family is burdened, and I know how it feels.Richa said on Wednesday that the Indian Army is able to execute any orders on returning Pakistan-occupied Kashmir (PoK), according to Northern Army Commander Lt. General Upendra Dwivedis, who stated in a previous address that all refugees would obtain their land and homes back.We will always be prepared for such orders, Richa shared on her Twitter handle. 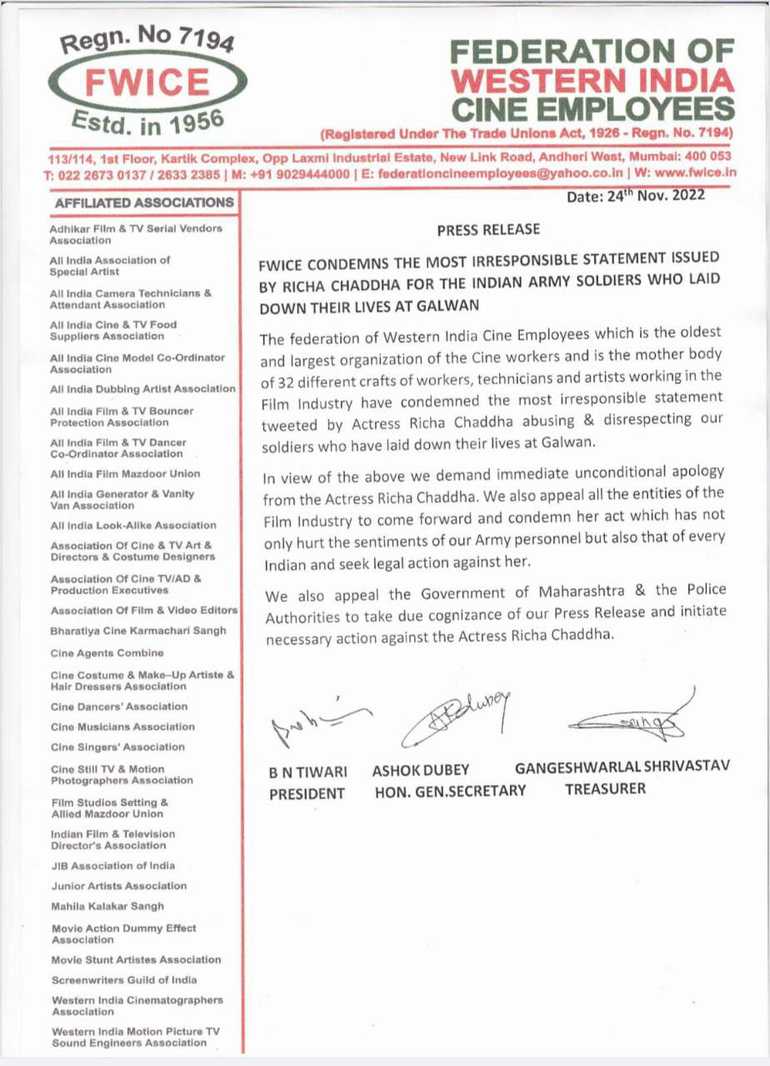 Ranbir Kapoor and Alia Bhatt are expecting a girl.

Here is the weight of the largest emerald in the world as listed on the Guinness website.

Ranbir Kapoor and Alia Bhatt had a baby daughter.

The Fall Guy will have Ryan Gosling and Winston Duke as the leads.